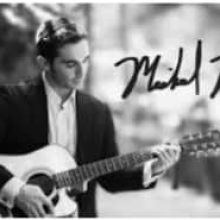 While studying for Semicah in Yeshiva University, Michael fine tuned his Nusach in the Belz School of Music and trained to master the art of singing with several voice coaches in the tri-state area and Vancouver B.C. He has served many communities for over 10 years as Ba’alTefilah for YomimNoraim, in addition to the largest known Orthodox Shul in Western Canada in Vancouver B.C.

Michael’s progressive sounds and soulful vocals will meet you where you are at and take you to the place you want to be. Michael is a true renaissance man, both an educator and an artist.

Currently serving as musical director of The Moriah School in Englewood, NJ, he drives his students for excellence in all genres of music and to appreciate the narrative behind the artist and pieces they are studying. After school hours, Michael gives voice, piano, guitar, studio recording, bar and bat mitzvah lessons. In addition, Michael has coordinated the music for the Central East NCSY region for the past 16 years.