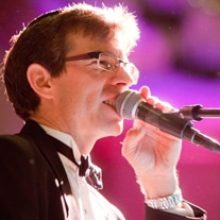 Leader of three bands, the Simcha Orchestra,Spotlight Music, and the Mystic Sideshow, Robby graduated with honors from USC’s prestigious Thornton school of Music, concentrating in composition and theory. An accomplished pianist, orchestrator, composer, conductor and vocalist, hesings in 12 languages and has performed all over North America, Europe, the Caribbean, and the former Soviet Union, where he toured with Rabbi Shlomo Carlebach.

Robby’s wide-ranging expertise includes the full gamut of Jewish both Ashkenazi and Sephardic music(Yeshivish, French-Moroccan, Persian, Yiddish, Chassidic, and Israeli) as well an astounding array of American and international pop, jazz, classical, Latin, funk, Motown and World Music. His bands feature more than 3,000 fully orchestrated and arranged songs, and he has presided over ensembles of over 30 pieces.

He is a primary ba’altefillah and gabay and the head of the ritual committee at one of the biggest synagogues in Los Angeles, B’nai David-Judea Congregation. He lives in Los Angeles with his wife and daughter and son.