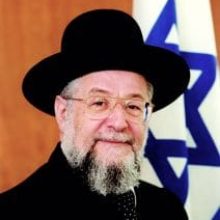 Rabbi Yisrael Meir Lau is Chief Rabbi of Tel Aviv. He had previously served in this position from 1985 until 1993. At that time, he was appointed Ashkenazi Chief Rabbi of Israel, a position which he held until 2003. Rabbi Lau currently serves as chairman of the Yad Vashem Council.

Rabbi Lau, a survivor of the Buchenwald concentration camp, immigrated to Israel with his brother Naphtali in July 1945 and was ordained a rabbi in 1971. He served as chief rabbi in Netanya (1978-1988), and earned a reputation as a popular orator. In 2000, he wrote a best-selling memoir about his experiences in the Holocaust entitled Do Not Raise Your Hand Against the Boy, which won the Israel Prize for life-work. The book has since been translated into English and published as Out of the Depths: The Story of a Chidl of Buchenwald Who Returned Home at Last.

Rabbi Lau and Rebbetzin Chayita (nee Frankel) are the parents of three sons and five daughters.