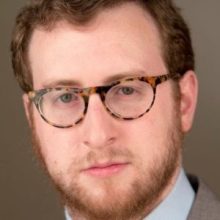 Dovid Efune is the editor-in-chief and CEO of the Algemeiner newspaper. He is widely credited with transforming the Algemeiner from a Yiddish language print publication into a major international online destination for Jewish, Israel and Middle East related news. He is one of a small group of journalists who has met with both US President Donald Trump and Israeli Prime Minister Benjamin Netanyahu.  Under his leadership, The Algemeiner has achieved #1 ranking on the Technorati ‘World Authority’ index and was referred to as “the fastest growing Jewish newspaper in America” by CNBC. The Algemeiner hosts over 1,700 bloggers, the largest such community of its kind.

Efune has two rabbinic degrees and a Masters in Hebrew Letters. He is regularly interviewed on major TV channels including CBS, CNBC, Fox News, CNN and i24 News. He is a popular public speaker and his writings have been published by other leading media outlets, including The Wall Street Journal, Foxnews.com and the New York Observer.  Efune authored a chapter on President Obama and Israel in The Global Obama (Routledge, 2013).