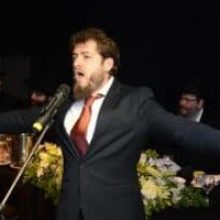 Choni was discovered at the age of 11 when he was chosen to share a stage with Mordechai Ben David. Argentinian Choni Grunblatt has been performing worldwide for 17 years.

Choni was the highest vote getter in Season One of A Jewish Star, an international singing competition. Choni has devoted years to vocal training and his magnificent tenor voice lends itself to powerful, sweeping songs. Choni lives in Buenos Aires Argentina with his wife and three kids.