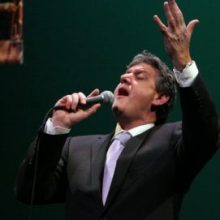 Moroccan-born Aaron Bensoussan studied the art of Sephardic Liturgical music with his father and master musicians in Morocco. Part of a Moroccan rabbinic dynasty, his grandfather Rabbi Haim David Bensoussan was the chief Rabbi of Morocco and his great grandfather was one of the most revered rabbis to emerge from the city of Fez.

Cantor Bensoussan has performed in concerts and festivals all over the world, including the Jerusalem Theatre in Jerusalem, The Mann Auditorium in Tel Aviv and Carnegie Hall in New York City. Composing music combining Ashkenazic and Sephardic elements with a tapestry of Middle Eastern Rhythms, Jazz, Flamenco and pop grooves, he masterfully weaves them together. His famous composition of L’cha Dodi, included on the Puntamaya World Music Series “A Jewish Odyssey”, has been sung in synagogues all over the world. With many cantorial and pop recordings to his credit, Aaron’s repertoire includes his original compositions and Judeo Moroccan classics. The New York Times calling his singing “stout and impassioned”. Aaron Bensoussan has served large and prestigious congregations as Hazzan for 25 years in New York and Toronto and now views the whole world as his bima.