Spread over two floors, the hotel’s spa enjoys a gentle and soothing atmosphere enhanced by the tranquil design and attentive care of the talented therapists. The award-winning chefs of the hotel and service oriented banquet staff will be working in concert with our own outstanding “Kosher Chefs”. They will create a fabulous gourmet culinary experience drawing from the best of Italian, continental and traditional Jewish fare under the Glatt Kosher supervision of Rabbi G.M. Garelik of Milan. Whether it’s in the ballrooms, or tearooms, a large variety of impressive delights awaits you. Our daily religious services along with thought provoking lectures and discussions, children’s program, plus exciting optional sightseeing tours will round out a truly unique Sukkot experience. 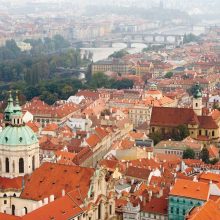 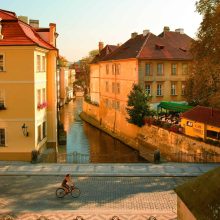 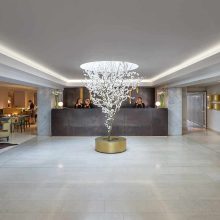 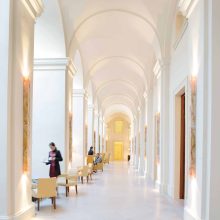 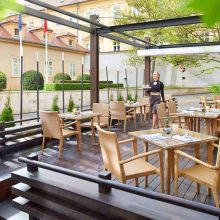 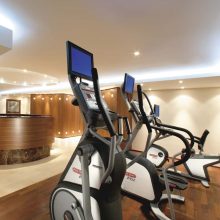 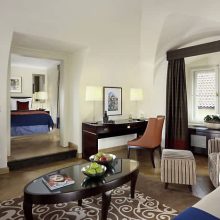 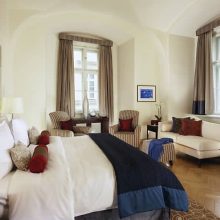 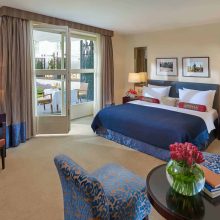 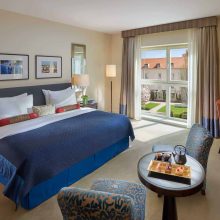 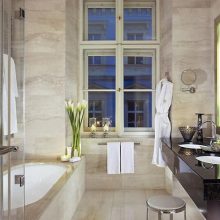 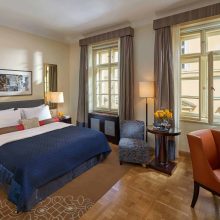 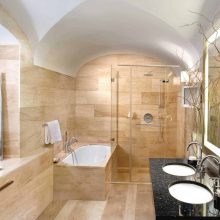 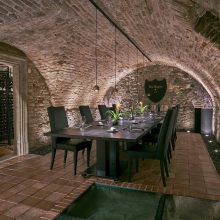 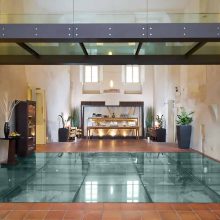 RATES INCLUDE 25% TAX & SERVICE CHARGES
ALL RATES IN EURO
ROOMS AVAILABLE
Category Rates – Per Person Double Occupancy
SUPERIOR : 344 sq. ft.
Located in Baroque, Renaissance and Spa Wings, these rooms enjoy an individual design with features such as sloping ceilings or exposed beams. The beautiful bathroom has underfloor heating and either a bath or shower. Street view

TERRACE ROOM 409 sq. ft.:
Located in the Garden Wing, these rooms enjoy access to a private terrace overlooking the gardens. Spacious bedroom with sitting area and desk. Beautiful spacious bathrooms with either bath or walk-in-shower.

RATES INCLUDE 25% TAX & SERVICE CHARGES
ALL RATES IN EURO 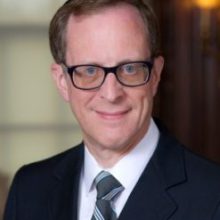 Adam Mintz, a Modern Orthodox rabbi in New York City and founder of KehilatRayimAhuvim, believes that the greatest challenge facing twenty-first century Jewry is the creation of educated Jews who understand that the key to the Jewish future is the appreciation of the Jewish past. Toward this goal, Rabbi Mintz teaches Jewish history and thought in a variety of venues including weekly lectures and scholarly and Torah lecture series around the country. He has taught at Rutgers University, Brooklyn College, Hunter College and is presently an adjunct professor at City College, New York.  Audio files of his lectures can be found complete with source material at www.rabbimintz.com

Karlovy Vary founded by Emperor Charles the 4th in the mid 14th century, became one the most famous European spa towns. Its hot springs were a cure to many celebrities, Czars of Russia, big Rabbis from all over Europe, intellectuals, poets, writers and politicians. Situated in the western bohemia mountains, Karlovy Vary is a stunning town with hundreds of hotels and cafes and a boardwalk for people to stroll and drink hot springs water. Great view tower can be reached with a funicular and optionally can be walked down from via forrest track. Just a few miles away lies the city of Loket (Elbogen) with its 12th century gothic Castle. The town centre is a national monument and as such, is preserved from modern development. Loket and Karlovy Vary are both the film site of 2006 James Bond Casino Royal. The castle can be visited in its interiors. 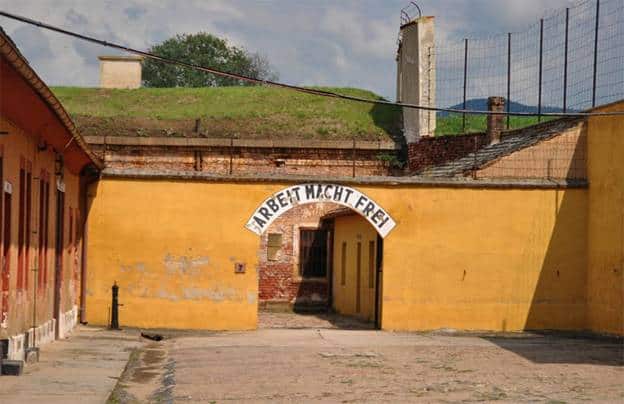 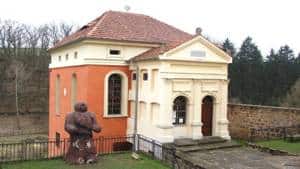 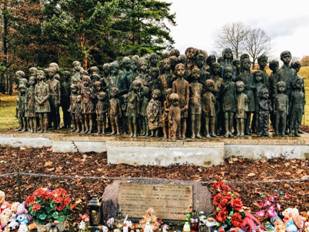 Terezinstat was a hybrid concentration camp and ghetto established by the SS during World War II in the fortress town of Terezin. Tens of thousands of Jews were killed there. We will visit the Museum of the Ghetto, Hidden Synagogue, Magdeburg barracks and the cemetery. From Terezin, we will travel 15 minutes to Ustek, a little town with a once existing Jewish community and preserved gothic square. In Ustek, we will visit one of the nicest synagogues which was restored and turned into a museum to show the Jewish way of life. On the way back to Prague, we will stop by Lidice, a town erased from the face of earth as payback to the Czechoslovak resistance, who managed to kill in May 1942 the 3rd highest ranking Nazi at the time and the Final Solution author, Reinhard Heydrich. 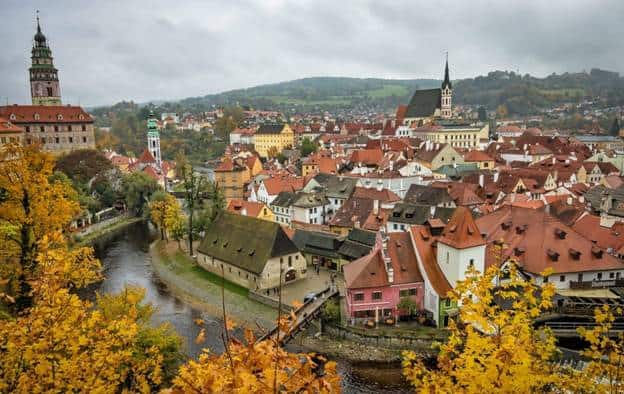 A jewel of Bohemian lands, that became during the 16th century the second most important city of the country, hosting many of scientist, astronomers, artist and nobility. A breath-taking beauty of a small town and a large Castle, sitting on the curved banks of Vltava river. We will visit the local synagogue, which was restored thanks to Jewish youth movement in recent years, the courtyards of the Castle and its gorgeous gardens. We will walk the streets of Krumlov and look for hidden alchemist messages and will enjoy a true vacation feel. 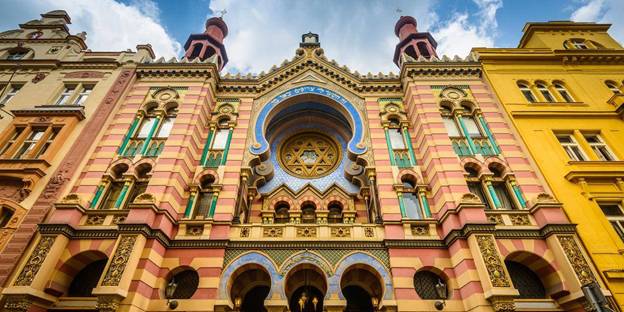 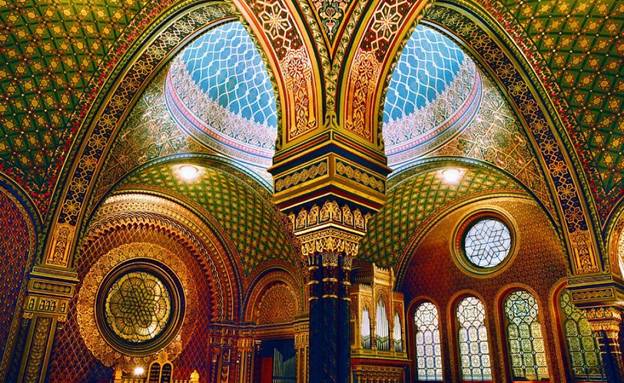 The Josefov neighborhood of Prague was a witness to rise and fall of the Prague Jewish community. Jewish presence in Prague dates back to the 10th century and was always an important part of Czech history. The former Jewish ghetto, at its peak, hosted up to 12,000 Jews and some of the greatest rabbis of diaspora history. On this tour, we will pay a visit to the Jewish Museum, a collection located inside of 5 synagogues, (the Old New, Pinkas, Maisels, Klaus and Spanish) an exhibition on Chevra Kadisha and the Old Cemetery, one of the oldest and largest Jewish burial grounds in Europe, which is the place of rest of the Maharal, KleiYakar, David Oppenheimer and others. Each building offers an exhibit on different periods, covering 11 centuries of Jewish life of the Czech lands. The Old New synagogue is one of the oldest continuously functioning synagogues in the world and offers a minyan every evening. 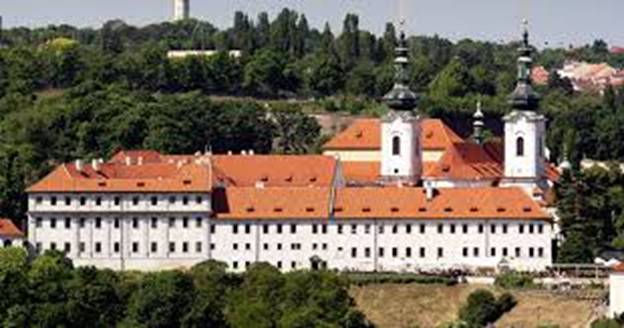 Prague is one of the few European cities that was not destroyed during WWII, despite the Nazi occupation and that is how one can see 1,100 years of architecture in what always had been a wealthy town. This tour starts at the Prague Castle, the seat of the president of Czech republic and allows the most beautiful views of the city. We will be passing Strahov monastery, renaissance and baroque streets of Lesser town, where many famous musical composers and artists once lived, to the Charles bridge, an icon of the city to the Old Town and New Town neighborhoods.From the Astronomical clock at the Old Town square or the 1348 Charles University buildings near the Theatre of the Estates where Mozart premiered Don Giovanni to the more modern Wenceslaus square, we will walk central European history’s ups and downs.