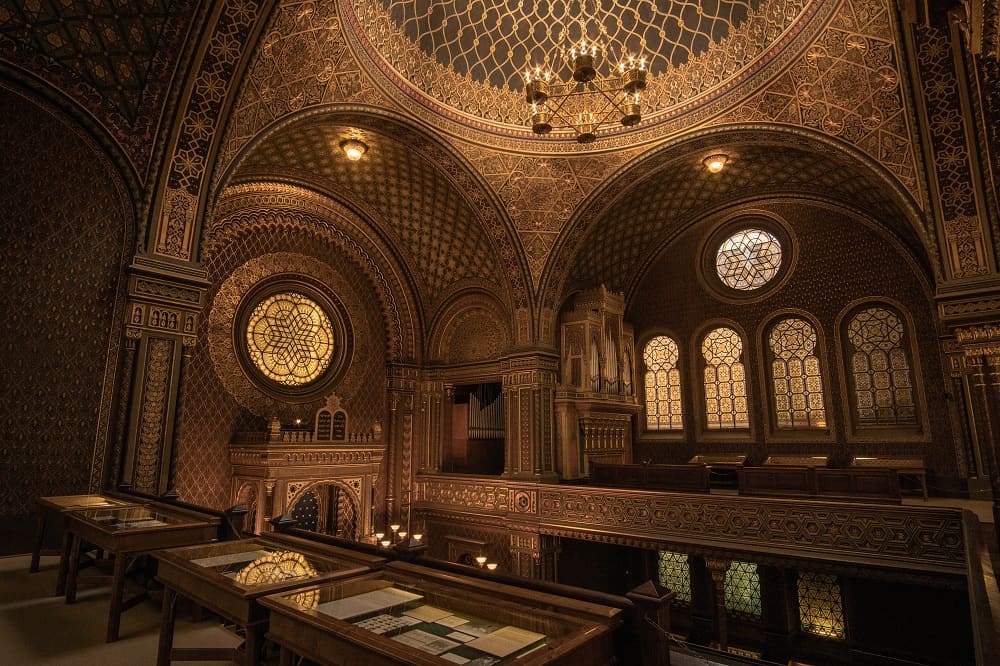 If you ever visit Prague, you’ll notice that there is a certain mystical aura to the city, an almost palpable sense of Divine protection.

Legend has it that in the late 16th Century, Rabbi Loew created a golem out of clay from the Vltava River to protect the Jews of Prague from danger. Is it possible that there is some truth to this legend? Some people believe, yes, because even as much of European Jewish culture was devastated by Nazis, the Jewish identity of Prague remained intact.

Whether or not the magic of the Golem played a part, travelers who visit Prague today have the unique opportunity to step back in time as they wander along the river, slipping in and out of the oldest synagogues and cemeteries in Europe, marveling at the rich culture of our ancestors, and basking in the otherworldly glow that encompasses the city.

Nowhere is that glow more evident than in the Jewish Museum of Prague. Nestled in the town of Josefov, the museum is made up of four treasure-filled synagogues, each with their own story to tell.

Step into the Maisel Synagogue for a glimpse into what was once the largest and most impressive building in the ghetto. Built in 1590 by Mordechai Maisel, it became a storage house for property belonging to the Czech Jewish communities during the Nazi occupation. Today, visitors to the Maisel Synagogue can peruse a wealth of rare collectibles. At night, the museum transforms into a venue for concerts and theatre performances.

Walk a few more steps to Široká Street and enter the Pinkas Synagogue where you’ll be plunged into the harsh reality of the horrors of war. Lining the walls of what was formerly a family’s private worship space, are the names of nearly 80,000 Holocaust victims from Prague and the surrounding Czech areas. A devastating art exhibit by children who died in the Terezín concentration camp is another stark reminder of the innocence and potential that was lost.

While the Pinkas Synagogue honors the loss of Jews, the Klausen Synagogue celebrates their lives. Once the town’s largest synagogue, today it houses a portion of the Jewish Museum’s “Jewish Customs and Traditions” permanent exhibit, containing artifacts relating to birth, circumcision, bar mitzvah, marriage, and divorce.

Wander a few blocks into the Spanish Synagogue, and you’ll feel as if you’ve slipped into another world. Built in the Moorish Revival style, the synagogue was constructed during the second half of the 19th century and featured Spanish and Arabic elements. Step inside and immerse in the beauty of ornate tiles and stained-glass windows. During the war, this synagogue also served as a hospital for the Prague Jewish community.

After you’ve visited the synagogues, take some time to reflect on our ancestors at the Old Jewish Cemetery, Europe’s oldest Jewish burial ground. This small area of land used from the early 15th Century until 1787, holds over 100,000 graves, many piled 12 deep. Layer upon layer of earth and bodies cover the ground in slanting directions like a testament to the chaotic tides of humanity. In this very cemetery lies Rabbi Judah Loew ben Bezalel, creator of the mythical Golem.

While the cemetery is steeped in mystery, perhaps the most mystical part of Josefov lies at the center, inside the Old-New Synagogue, Europe’s oldest existing synagogue. Legend says that angels brought the stones for the foundation from the Temple of Solomon and will expect them back when the Temple is restored. Inside, twelve windows represent the 12 Tribes of Israel, and brass chandeliers illuminate the walls from vaulted ceilings. In the late 19th Century, the great philosopher Franz Kafka, himself, had his bar mitzvah right inside these holy walls.

But, Kafka wasn’t the only famous visitor. To enjoy the rich Jewish history of Prague, be sure to pay respects to the Golem, who is said to lie dormant in the attic of the Old-New Synagogue, watching over the treasures of the city and waiting for the moment that he is summoned to once again protect the Jews of Prague. Hopefully not during your visit!

Visit Prague with Leisure Time Tours and get the true Jewish experience. As one of the hottest destinations for Orthodox travelers, Prague is filled with sightseeing opportunities for the get-up-and-go type traveler. Contact us at 718-528-0700 to book an unforgettable vacation with us today.